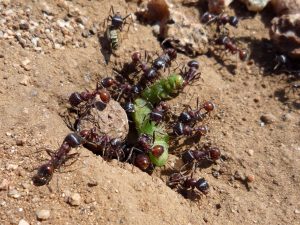 Ants are prevalent throughout the world. The industrious insects work together to form a colony. Many people are fascinated by ants and all that they do. Here are 10 interesting facts about ants.

The queen’s primary purpose is to lay eggs for the colony. The worker ants will bring the queen food and take care of her needs. If they need to evacuate, the ants will even carry the queen so that she does not move. Queens can live up to 15 years.

There are 12,000 species of ants throughout the world. Some ants are aggressive like the fire ant and army ant, while others are more focused on building a colony like a harvester ant or black garden ant.

The carebara atoma are the world’s smallest ants. They are about one millimeter long. The biggest ant is the camponontus gigas and their heads can be up to seven millimeters wide.

A queen ant can lay up to 300,000 eggs in just a few days. Since queen ants can live up to 15 years that means she can lay millions and millions of eggs while she is alive.

Ant colonies can vary in size from species to species. However, there are super colonies that can have several queens and a large number of worker ants. According to Wikipedia on ants, the largest ant colony is in Southern Europe that one super ant colony had millions of nests stretched along 3,731 miles of shore.

7. Ants Can Carry 3 Times Their Own Weight

Although very small, ants are very strong. They can carry up to three times their own weight. Ants will also work together to carry heavy objects.

Ants have a unique hive mind that allows them to communicate with each other and work together. The idea of a hive mind has been the basis of many science fiction stories, but ants seem to pull it off without any of the related fears and concerns. Although ants are interesting creatures, they are not as fascinating when they are invading your home or kitchen. It is important to stop ants as soon as you see them since more are sure to follow. The experts at EcoTek Pest and Termite Control can stop ants from invading your home.
Call our Pest Control Experts Today!
919-794-8290