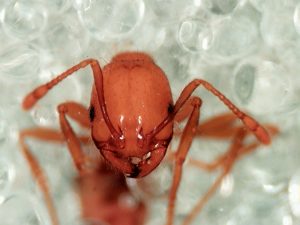 Fire ants are an invasive species that are spreading throughout the United States. They first arrived in Alabama during the 1930s. They caught a ride on boats from South America. They spread quickly and are quite an aggressive species. It’s important to be able to identify the type of ants you have before you can determine the right treatment for killing them.

Fire ants are black and red in color. The worker ants have mandibles that they can use to bite victims. There is also a stinger on the abdomen. They have three clearly segmented. The fire ants are between to 2 mm to 6 mm in size, which is about a fifth of an inch in length. The fire ants also have large eyes and segmented antennae. There are three teeth on the front of the head.

Fire ant colonies are quite large. They can be up to two feet in diameter and up to eighteen inches in height. They are different from other mounds because they will not have a hole in the top of the mound. They will enter through tunnels that are along the side of the mound. If you are treating the mound, they will leave through the tunnels, which can extend up to twenty-five feet away from the mound. They tend to be in a sunny area where they can find water outside. The colonies can include up to 500,000 ants. When the colony gets large, they may sound out new queens and males to establish a new colony. When faced with an infestation, it’s best to kill the fire ant colony as quickly and thoroughly as possible.

Fire ants will bite and sting when threatened. When they do this, they release a pheromone that signals there is danger and all of the ants will attack you. They can do this is a swarm, and the number of bites can cause a serious allergic reaction. It may seem like they have a signal to attack all at once, and in a way they do, though usually it is a self-defense attack.  They like to feed on dead animals, living insects and honeydew. They will also eat sweet foods, fats and proteins from your home. Although fire ants can plague your yard, read some facts about carpenter ants and how they can be detrimental to your home.
Call our Pest Control Experts Today!
919-794-8290